“Intuition unleashed by the will of the driver.” —Acura.com

Direct Gas Injection injects fuel directly into each cylinder with a multi-hole injector for a more precise and effective air fuel mixture. It also uses significantly less fuel when the engine is being started.

Tapping a paddle shifter while in "Drive" brings a quick gear change with automatic operation returning when reaching a steady speed. This allows you to make quick gear changes without changing in and out of manual mode.

ll four corners are fitted with exclusive Amplitude Reactive Dampers, which feature two piston valves per damper (a.k.a. shock absorber) rather than one. The main valve helps absorb minor road vibration, while the second one is stiffer, reigning in a larger suspension motion for improved stability.

Precision All-Wheel Steer™ (P-AWS®) is designed to deliver an unprecedented level of handling precision and control. It's the first system that enables the rear wheels to adjust toe angles independently of each other. Working in concert with Vehicle Stability Assist™ (VSA®) and the Agile Handling Assist®, P-AWS® helps enhance vehicle stability, maneuverability, and control. 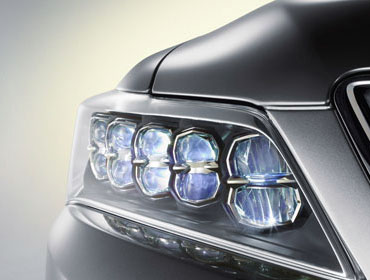 The low beams are comprised of eight LEDs that shine through 16 lenses. Each pair of lenses is precisely aimed to focus the LED beam over a longer and wider surface area, enabling the driver to see the road more clearly, without blinding oncoming traffic. 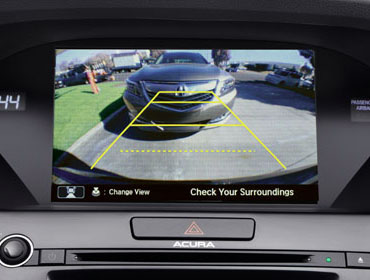 The RLX comes with a rearview camera that automatically produces a display in the center screen when "Reverse" is engaged. There are three separate views, allowing you to select the one that best serves your situation. You can change the views by pressing the center panel's "Enter" control. The normal view is ideal to look for items behind the RLX that are too low to be seen through the rear window. 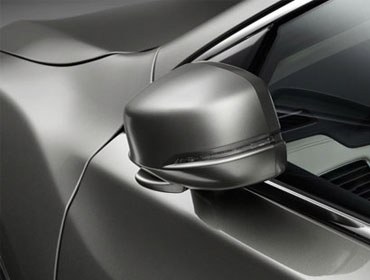 With the Advance Package, the mirrors will fold alongside the car at the push of a button or can be set to automatically fold when the doors are locked from outside the vehicle. The side mirrors will also dim automatically in the evening to prevent headlight glare from becoming a distraction.

The Keyless Access System with smart entry and pushbutton ignition allows you to walk up to the RLX, unlock the doors, have the car set your preferences and start the engine without ever having to take the key out of your pocket.

The RLX introduces the ELS Studio® Premium Audio System. Designed in part by Grammy® award-winning recording engineer and producer Elliot Scheiner, it adds more power and more speakers to the already critically-acclaimed ELS system. The four additional speakers in the rear doors have been added primarily to enhance the spatial dimension of the sound for the rear passengers.

Conventional cruise control has always been welcome on long highway trips, but can be of little use on an urban driver's daily routine. As with a conventional system, the available Adaptive Cruise Control (ACC) with low-speed follow system allows you to set a desired speed, but it will also keep a set interval behind a car detected ahead of you so you can enjoy cruise control even in light traffic conditions.

At 38.8 inches, the RLX offers more rear legroom than the Lexus LS, Audi A8 and comes within a tenth of an inch of the Jaguar XJ and BMW 7-Series sedans. Rear occupants have their own climate control zone, which they can set with controls behind the front center console.

In addition to two front airbags, two front-side airbags and side curtain airbags providing coverage for outboard occupants in both rows, the RLX is also equipped with a driver’s knee airbag.

LATCH (Lower Anchors and Tethers for CHildren) anchors plus upper-tether anchors in the rear seat allow LATCH-compatible child seats to be installed in the outboard positions without the use of seat belts.

We're sorry, but we do not have a 2016 Acura RLX in our current inventory.