“... This RLX dances like a much smaller sporty car” —Motor Trend

Power and efficiency: Most manufacturers have a hard time reconciling these two ideals. One has to come at the expense of the other. Or does it? At Acura, the answer is “No.” The RLX Sport Hybrid SH-AWD not only excels at both, with 377 total system horsepower and a 30 combined mpg rating, but sets—and achieves—a third goal: Extraordinary Handling.

It is revolutionary engineering: Two independent electric motors to drive the rear wheels. Through a curve, they produce positive and negative torque—also known as torque vectoring—to deliver unprecedented cornering capabilities. Working in unison, the motors provide power for standing starts, low-speed cruising and, when called upon, vigorous rolling acceleration.

Unlike many other hybrids designed solely for fuel efficiency, the powerful V-6 engine in the RLX Sport Hybrid SH-AWD has not been tamed. The engine retains its exhilarating performance, including i-VTEC® technology and direct injection. 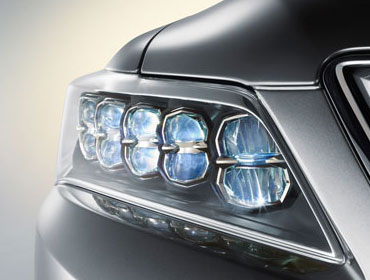 All RLX models are equipped with Jewel Eye LED headlights which provide a whiter, brighter beam than HID or halogen headlights, while using less energy and lasting significantly longer. 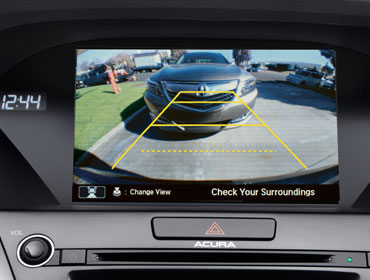 The RLX comes with a rearview camera that automatically produces a display in the center screen when "reverse" is engaged. There are three separate views, allowing you to select the one that best serves your situation. You can change the views by pressing the center panel's "Enter" control. 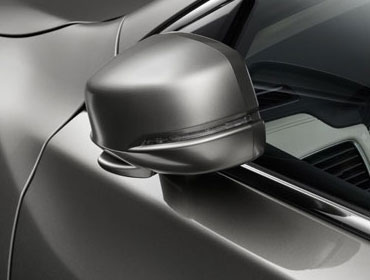 While side mirrors are often an overlooked component in many cars, in the RLX they’re surprisingly feature-rich.

The RLX instrument panel takes the Acura interior-design DNA to a whole new level. Supple leather starts at the front door panels, sweeps across the curves of the Acura dual-cove instrument panel, and clothes the center panel controls, surrounding the driver and front passenger in leather.

Grammy award-winning recording engineer and producer Elliot Scheiner helped design this critically acclaimed ELS Premium Audio System to reproduce music as music it's heard in the recording studio. With music sources available over the air, internet or your own digital library, even the most familiar music can become an all-new listening experience.

In addition to the sophisticated, new touch-screen controls and the versatile steering-wheel controls, the Voice Recognition feature that accompanies the Acura Navigation System allows you to perform the most frequently used functions of the audio, climate control, and navigation systems without ever lifting a finger.

Open the trunk lid, and you’ll find a wide area with a flat floor that easily accommodates large pieces of cargo.

Since an under-inflated tire impedes handling and can be a safety hazard, the Tire Pressure Monitoring System (TPMS) uses pressure sensors mounted in each wheel that send readings to a central electronic control unit. The system then evaluates whether the pressure is up to an acceptable range.

We're sorry, but we do not have a 2014 Acura RLX Sport Hybrid in our current inventory.